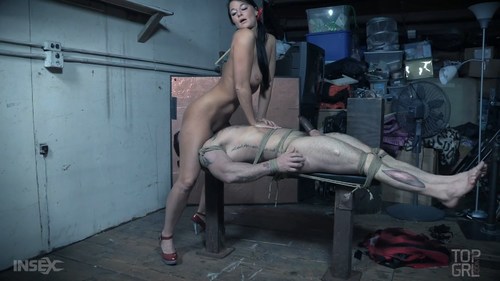 Sergeant Miles thinks he has the drop on London River. He has her brought in unconscious by one of his goons and ties her hands together in the chair. He is, of course, mistaken. No one has ever gotten the drop on London and she’s made her own deal with the goon. She comes to in the chair, unties her own hands, and with one swift and decisive stroke, she stabs a needle into Sergeant Miles’s neck, knocking him unconscious. Finding himself tied to his own chair this sergeant is about to find out he’s made the worst mistake of his life as London gets her revenge.
London leaves Sergeant Miles tied up until he is hungry enough to eat just about anything, but he is determined not to crack. She has other plans in mind, feeding him a meal that will make the toughest stomach turn she starts chipping through his tough exterior. She then strips Miles down, shackles his feet to the floor and cuffs his hands to a metal bar above his head. That doesn’t seem too bad until he notices that he’s sitting on a giant copper plate and London is about to flip the switch and run electricity through it. Then he finds himself gripping the metal bar holding himself up with all of his strength, but no matter how strong he is, occasionally that strength gives and he falls down onto that plate. When that happens, to London’s great amusement, his whole body jerks upward and he lets out a shout of pain.
London has a complicated relationship with her attacker, she wants to enjoy him, but she doesn’t want him to enjoy much of anything. That’s why she comes up with the idea to smear lidocaine on his dick, cover that up with a condom so it won’t effect her, and play with it to her heart’s content. First she sits on his face, watching him struggle, unable to breathe with his mouth and nose covered by her ass and pussy. After a while, he stops struggling and falls unconscious, and then it’s time for her to have her fun. She climbs on top of his dick and rides it to her heart’s content. 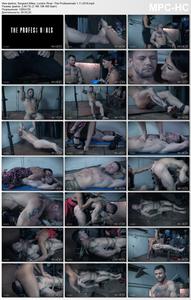